Pouring the concrete. Nothing on this scale had been recorded since 1999, when the foundation of the Venetian in Las Vegas was poured. The success of the Grand Pour put the New Wilshire Grand in the Guinness Book of Records for the largest continuous concrete pour. The Grand Pour ballet Organized and timed deliveries of concrete were crucial in the pouring of nearly 84 million pounds of the slurry, which had to be laid within 90 minutes of the initial mixing. 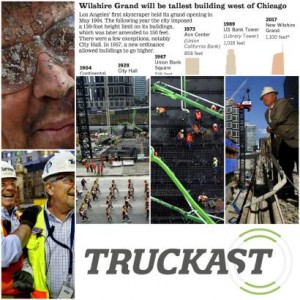 January 14, 2015/ by TRUCKAST/ in Uncategorized/ Comments Off on Pouring the concrete